We hope our Meowvelous Monday Haiku and
other poems put back the spring in your step
to start off the week on the right paw…
or left paw…. oh well, it doesn’t really matter
because 10% of us cats are ambidextrous.

Mr. Jack presents today’s Marvelous Monday Haiku and he hopes you find your moment of truth, your hidden gem, your ray of hope tucked away somewhere in your bleak and busy Monday. He has, and he’s delighted to show you how.

END_OF_DOCUMENT_TOKEN_TO_BE_REPLACED

Wake up bright and early, come on, off to work you go! I will leave you with just one little gem for my Marvelous Monday Haiku. I hope you feel inspired, ready to embrace new challenges today and for the rest of the week.  END_OF_DOCUMENT_TOKEN_TO_BE_REPLACED

Have you ever felt like you needed to break free from your comfort zone and push yourself to the next level? Do you remember how accomplished you felt when you finally achieved that goal? Comfort zones are hard to break through; after all, that is why they’re called comfort zones. Why explore or push the boundaries when everything around you is ‘just so’?  END_OF_DOCUMENT_TOKEN_TO_BE_REPLACED

Earl Grey was out and about by himself this weekend and really showed us what tenacity he has. I felt compelled to follow along and capture his catio walk, just in case he needed that extra nudge in the right direction.

He is determined to make that jump, despite his blindness. He is almost half the weight he used to be but still has some strength in his hind legs.

Just minutes before in the kitchen, he was reclining on his cardboard scratcher and I thought, “he’ll probably be there for a good few hours and won’t move.” I proceeded to play the album Music for Cats, which I used to play all Summer last year for kitties’ pleasure.

Just as quickly as the music had begun, he was alert and climbed down from the scratcher, slowly edging his way down the stairs toward the laundry room. This is the gateway to the catio. END_OF_DOCUMENT_TOKEN_TO_BE_REPLACED

A sweet peck on the cheeks, a nose to nose greeting, perhaps a game of chase a bit later. One of them is twice the size of the other but in recent months, Charlie and Sarabi have formed a friendship that is quite odd, yet endearing to watch.

At 20 pounds, with a large set head, cheeks and jaw line that resembles an unneutered Tom’s, this large lad could easily rule the Chirpy roost. Instead, Charlie is a huge cuddle bug and chief biscuit maker, always bowing his head in submission to the Chief Social Facilitator, Mr. Jack, asking for head boops and grooms. His physique bears testimony to the much-touted phrase “he’s not fat, he’s just big-boned, because, well, he truly is big boned!

END_OF_DOCUMENT_TOKEN_TO_BE_REPLACED

There is nothing like reading a good bit of nonsense verse to take you away from the swirling vortex of insanity in which our busy lives have us entrapped! Just like watching a YouTube cat video or a funny cat meme gives you the chuckles, a funny limerick always lightens the mood. Today is National Limerick Day which honors the birthday of English artist, author, poet and illustrator, Edward Lear, born in 1812. Limericks were popularized in his “Book of Nonsense” in 1846 and in it, “The Owl and the Pussy Cat” stands out as one of the more memorable verses from my childhood. Why would a carnivore and a bird want to marry and sail away in a pea green boat? Were they eloping? Were they just free-spirited bohemians who defied society’s conventions? The ambiguity and quirkiness of these poems make it all the more silly and has prompted me to write a few of my own. The protagonist for my limericks is none other than our resident class clown, Mr. Jack. Why him? Because if he were sitting in that pea green boat, they would never have “sailed away for a year and a day”. No, he would have blown the five-pound note on catnip and partied all night long with his friends.

END_OF_DOCUMENT_TOKEN_TO_BE_REPLACED

It’s the first day of Spring and we are marking this fresh new beginning with some Marvelous Monday Haiku to get you started on the right footing. If you’re anything like The Big Lady Cat, you are still recovering from the Daylight Savings Time clock change debacle and your Mondays will still be tinged with “meh”. There is nothing worse than a blue-tinged Monday, except I think when your catio is still paw-deep in snow and you have to wade through it because the humans won’t shovel it. But never mind, we are positive and looking on the bright side; we will soon be seeing the buds on the vine and saying goodbye to our white-tinged catio.

END_OF_DOCUMENT_TOKEN_TO_BE_REPLACED

Hello, it’s Ollie here and I’d like to kick off another edition of Marvelous Monday Haiku to shake off that Monday blues. We spent all weekend trying our best to stay cool. It seems the heat and humidity are back for a brief period just to remind us that we’re still very much in a transitional phase when temperatures are all over the place. Some of us spent time inside, lying on our backs, belly up under the fans, and some of us who like the heat just chilled in our catio as usual. The African Daisies are still in bloom and the bees are hard at work. We like this slow transition, we’re not is a hurry for anything to change. Let nature take its course and we will follow along. In today’s gallery, I invite you into our world and hope this week’s haiku picks will inspire you to stop and savor the moment. Do not let that mountain of work overwhelm you, just sort through it one by one and reach out for help when you need it. My paws have the healing magic touch, just so you know.

How do you deal with your Monday workload? Do the shorter days affect your mood? Grab your first-morning coffee and tell us in the comments below.

Hello there! It’s Scout again and I confess, I am saying goodbye to Summer with a bit of ambivalence. Yes, I said I am the Autumn girl, but I also enjoy staring at and posing next to pretty flowers. Last week in our Summer Highlights haiku, I invited you into a few of our favorite spots where we spent the lazy long days in the summer shade. In the gallery below, some of our plants look withered and forlorn. But not to worry, that’s a good sign that soon, the big Lady Cat is going to be preparing the harvest of our favorite herb – catnip. We can’t wait for that! But in the meantime, let’s just focus on the here and the now shall we?

Are you enjoying the cooler air? We’d like to hear from our furry friends and their humans.

Hello, my name is Scout, the Tortie and I present this week’s Marvelous Monday Haiku. Summer is the season favoured by most of my pals and until we see the first hint of yellow or red leaves in our catio, in the coming weeks we will be highlighting some of the best times we had this summer. The humans had extended our catio with some extra tunnels this year and we had plenty of zoomie sessions chasing each other in there. My favourite season is Fall because I am known to ‘decorate’ the house with all sorts of pretty leaves and I collect the best ones for the Big Man Cat which he loves, I think.

END_OF_DOCUMENT_TOKEN_TO_BE_REPLACED 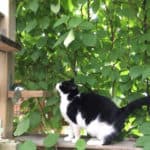